The Case for Free Bus Rides 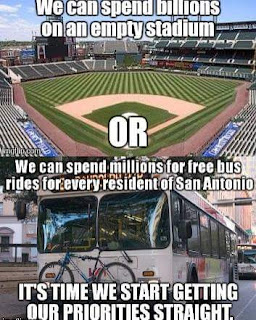 As part of my City Election 2017: Candidates Position on Cycling I asked one question that stood out. Question 'J' is  the question about providing free bus rides to all citizens of San Antonio. It a question that I believe that we need to start answering for when it comes to the future of transportation options, well there's only one option for San Antonio and that's driving.

As I stated before in previous post, I said that we here in San Antonio consider driving a free thing to do. We attack the ideal of toll roads, we attack the ideal of getting rid of a vehicle lane to make room for a bicycle. We attack the very ideal of light rail, calling it a waste of money. Yet we never attack the fact we don't have money for roads, that freeways don't pay their way nor decrease the number of ozone action days we experience every year.  We call toll roads double taxation yet we never say riding the bus is double taxation. We paid for the bus service through a half cent sales tax and yet we are forced to pay to use the bus like paying to use a toll road. Let that sink in for a moment especially if you're anti toll road.

If you where to ask me 4 years go, I would have said that it was a bad ideal because of what happen in Austin. So what did actually happen in Austin when free bus rides were offered back in 1990? In 1990, Austin, Texas decided to make the buses free of charge. Things went well at first, but as the program went on, problems started to arises because people who wouldn't normally be able to ride would abuse the system.  There's a term for these types of people and they're called "problem riders." And after one year of offering free bus rides, they immediately institute a 50 cent bus fare.

I began to reconsider this when I heard what the city of Tallinn in Estonia was doing which was making the public transit free of charge and still charging the tourist.  Believe it or not, we do something similar here in San Antonio with the hotel/motel tax.  We charge tourist a tax to pay for our parks, and other improvements.  Some of the money that is going to pay back this bond 2017 and other previous bonds is coming from this tax right now. So why can't we do the same thing for the residence of San Antonio?

So what did happen in Tallinn when they made the buses free of charge.  Well to use the bus free of charge, you have to be a residence which cost €2 to register.  There was no change in driving habits of people, but what they did see was a increase of rider from the most poorest areas of the city.  So far, they don't have a problem with vandalism or with more problem riders.

So Why can't we do the same thing here?  My vision for free bus fare in San Antonio consist of paying a yearly fee of no less than $30 to no more than $100 per resident or household of San Antonio.  This pass will work like a regular 31 Day Pass, but will last 13 months, giving enough time for people to buy a new yearly pass. This pass will only be available to residence of San Antonio.  To qualify, you need at least 2 or three things.  They can be a pay stub or a your W2, an government issued ID, a CPS Energy bill, a SAWS bill, a lease to a property, or a property tax receipt from that Bexar County Tax assessor office. I envision having people from VIA setting up a table at VITA centers to register people.

Now this isn't the only strategy to consider. "Fare Free Zones" are places where people don't have to pay to board the bus.  Several cities use this to encourage people to use public transit mainly in their downtown area.  MATA has a fare free zone in West Memphis, AR (which I have actually used) and the UTA has several fare free zones in and around Salt Lake City, UT. For San Antonio, I could see fare free zones being transit centers or even parts outside of loop 410.

Today A 31 Day Pass cost $38.  If you don't think that's a lot of money for a struggling family then guess what, your doing pretty well.  That's up $4 from the cost of $34 when I last purchase one in 2015. (And no I still don't own a car.)  It means parents who use the bus system to say that their kids are still 11 yrs old when they're actually 14, (yes I have done it.) to people begging for bus fare on the bus.  And yes I have begged for bus fare on a VIA bus and I do donate my own money to help a person paying for bus fare when this happens.  And if you are wondering why I say that "driving is consider a free thing to do" then look no further at the cost of renewing your a car registration yearly.  According to the Texas Department of Motor Vehicles, it cost $51.75 plus (and since I don't own a car and don't know this fee) $10 local county tax fee, plus $7.50 Inspection Fee.  Now that not counting the insurance cost, so lets go by the cheapest and we'll just do a one month because if you don't think that people here in San Antonio who are struggling financially are cutting corners, then you are doing pretty well.  For sake of argument, well say that insurance is $50.  The Last time I got a car inspected was $30.  Add it all up, $51.75+$10.00+$7.50+$30.00+50.00 = $149.25.  So if you don't take into account for the cost of gasoline, maintenance, and insurance which when you are poor, you try to avoid paying, basically it cost only $149.50 to drive around.  Compare that to a 31 Day pas, which according to the math, you'll buy 12 passes in one year 365/31= 11.77.  $38 per pass times 12 passes comes to roughly a cost of $456 per person.

Now if you want to contradict me in the comments below, go right ahead.  But if you fail to take into consideration that the average person who can't afford a car, lives primary from paycheck to paycheck and they're only looking at that $149.50 to pay per year to legally operate a car comparing to the $456 per year, then it's seem like a better deal. Just compare the travel times on google maps, with a car to that of VIA, especially since more blue collar jobs are outside of VIA's service area, then you begin to see why so many people who ride VIA says it sucks even though I pointed out how they really have their act together.  At the end of the day, it was Bernie Sanders says, it's more expensive to be a poor, and he's correct.

If we can find money for vacant sport stadiums, for sport teams that will never make San Antonio home, or anything else you believe is a waste of tax money, then we can definitely find the money to do this.  Now I know I'm going to hear the excuse "we don't have the money for this," but I know that I'm going to hear one or two ridiculous excuses.  If you follow news on VIA, just watch, you'll come across one that is just so out there, so nutty, it will be a good enough reason never to invest in a tool to fix things.

Posted by Daniel Day, the Famed Sir Bikes A Lot at 6:38 AM 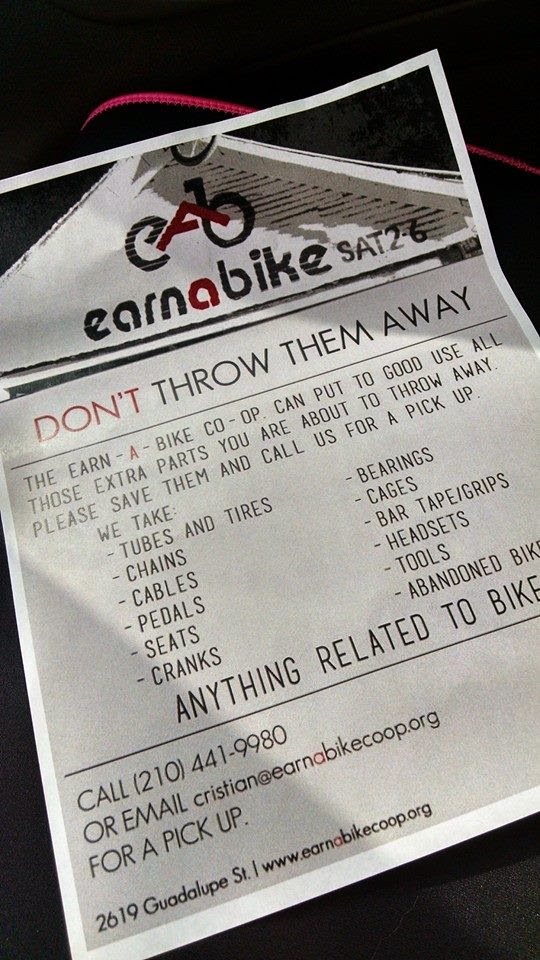